A Prophetic Bishop Speaks to His People: The Complete Homilies of Archbishop Oscar Arnulfo Romero. 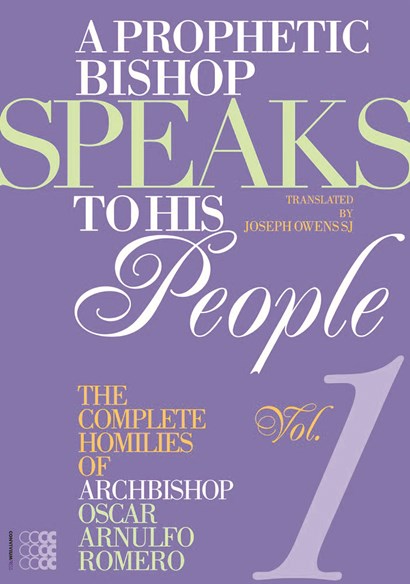 All preaching involves a three-way encounter between the preacher, the text and the hearers. The preached message develops within a unique set of circumstances. Each sermon is what the American homileticist, Eugene Lowry, calls ‘an event in time.’ The homilies in this collection are the product of the preaching of a saint, pastor and martyr, bringing the timeless message of the Gospel to a flock living in a time injustice, deprivation and the violence of civil war.

No ordinary preacher, Oscar Romero was murdered as he concluded his homily at Mass in a hospital chapel, on March 24, 1980. When he was first appointed as a bishop in 1970, he was seen as a conventional and politically conservative individual, but his experience of a situation in which priests and lay activists were assassinated for their practical solidarity with the poor made him into a fierce advocate of social justice in his preaching to a congregation that included the many thousands who listened to his weekly Sunday homilies on the Church’s radio station. His homilies follow the cycle of the Roman Lectionary and in the words of Methodist Professor, Edgardo A. Colón-Emeric, Romero interpreted ‘Scripture through the plight of the poor. His theological vision is most succinctly expressed by his saying, “Gloria Dei, vivens pauper”: “The glory of God is the poor who lives.” God’s glory was first revealed through Christ to a landless tenant farmer, a market woman, and an unemployed labourer, and they received the power to shine from the church to the world.’(Óscar Romero’s Theological Vision: Liberation and the Transfiguration of the Poor, University of Notre Dame Press: 2018).

Leafing through these volumes of Romero’s homilies it is evident that the message of Scripture is always incarnated in contemporary experience message of Scripture. As Brian Pierce tells us, ‘the mission of the Word of God is to pierce the flesh of real human history, opening up wounds that fester from lack of the truth and bringing healing to a people longing to experience the saving power of God.’

By way of just one example, I was looking for inspiration for my Christmas homilies, conscious of contemporary experience in a 2019 Britain bitterly divided between Remainers and Brexiters, with exchanges of harsh insults and recriminations between rival political factions. Compared with El Salvador in 1979, such problems seem almost trivial. Preaching in the context of a situation in which workers had been refused their wages and their protest had been met with arrests and murders by the authorities. Meanwhile radical leftists had engaged in reciprocal violence. His Midnight Mass homily begins by congratulating his hearers on their courage in coming to the cathedral when ‘many people are frightened and are locking their doors …’ He went on to find a message of encouragement in the birth of Christ, ‘How I would like tonight to shout out over all the fields of El Salvador the great new of the angels “Fear not! A Saviour has been born!” (Luke 2:10-11) What now appears hopeless, a dead-end street, is being marked out by God and filled with hope.’ Going on to speak of the poverty of Christ’s birth, Romero warned against looking for Jesus ‘in the opulence of the world or among the idolatries of wealth’ or by contemplating ‘the lovely figures in our nativity scenes’ Instead he urged his hearers to ‘seek God where the angels say he is, lying in a manger on a little straw, wrapped in the poor bit of cloth that a humble woman of Nazareth could afford and we should look for him among the malnourished children who went to bed tonight with anything to eat. We should look for him among the poor newspaper boys who will sleep tonight on doorways, wrapped in their papers…’

Living in different circumstances, with very different congregations, preachers seeking a liberationist hermeneutic for their sermons will find extraordinary inspiration in these volumes, learning from the way in which this great soul made the texts of Scripture come alive as a living word of Good News for the poor.

The whole set is available at a special half price discount to readers of The Preacher if ordered direct from romerotrust@gmail.com.

@ CollofPreachers
Wed 12 May @ 10:07
"Preaching is not about filling in a sermon slot with stale 'stuff'. About meeting expectations of a job well done"… https://t.co/YxZpH3z1Cz
Follow us