Making a Scene in the Pulpit: Vivid Preaching for Visual Listeners 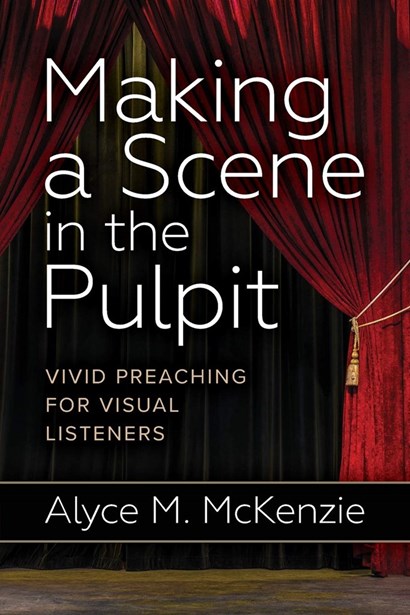 I rather suspect that Making a Scene in the Pulpit might end up on the desks of many a preacher, and the reading lists of many a homiletics module. In it, Alyce McKenzie aspires to offer the next stage on from narrative preaching, an ambition made clear by the title of the first chapter, ‘Scene is the New Story.’ In it she traces the history of preaching, and the rise and dominance of narrative preaching between 1971 and 2000. We have much for which to thank the New Homiletics, she says, but we now live in a new age. She characterises this age as biblically illiterate or indifferent; unimpressed by Christian public witness; attracted to alternative stories (consumerism, nationalism, individualism); and suspicious of the Christian narrative because it seems too neat and tidy. Interestingly, McKenzie also claims ‘[s]ome cultural theorists are saying that the issue is not that contemporary people don’t want to buy into our salvation narrative. It is that they can’t because they have lost the narrative competence to make connections between the “Story” and the disjointed episodes of their daily lives’ (18). If this is the case, then preachers certainly need to do something about the way we preach!

The solution, this book proposes, is ‘scenes.’ People think in, and relate to, scenes. ‘Every minute 300 hours of new video are uploaded to YouTube. That’s way more than all the TV networks’ combined airings in a year’ (20). Scenes function beyond drama in the worlds of education, music, maths. Anthropology has its case studies, law has its closing arguments. Scenes in a sermon function in a way like the television commercial, inviting people into a story. Preachers, like actors, need to know the big story, but deliver it one scene at a time.

The preacher becomes more than a deliverer of God’s message, or an entertainer, however. McKenzie contemplates the preacher as ‘sage’: the ‘seeker of wisdom, attentive to God’s presence and guidance in the inner life … the text … and the community text of daily life’ (26). A key skill for preachers is the ‘knack for noticing.’ The author goes on to make a case for the existence of this ‘knack’ in various parts of Scripture – Proverbs, Job, Ecclesiastes, Jesus’ teaching – and among preachers of the past. This is an interesting, if slightly unconvincing, chapter. The high point among quotes from past preachers is perhaps Whitefield’s insistence on being heard: ‘I have not come to you in my own name. I have come to you in the name of the Lord of Hosts … I must and will be heard’ (44).

Making a Scene in the Sermon, Chapter Four, explores what scenes might do: change the hearers’ definition of theology from theoretical knowledge to practical wisdom (75); focus in the moment of the text. A scene has Pulse, Purpose, Plot and Point of view (78) and reflects the preacher’s own receptivity to life events. The chapter continues with some examples of using scenes in sermons, from opening scenes to multiple scenes to the single scene sermon aimed at those only partial attention (according to McKenzie, most people in the contemporary world). Ideas for effective openings and effective endings are presented. Finally, Chapter Five offers examples of scenic sermons.

Making a Scene in the Pulpit offers ways of bringing together the inner life of the preacher, the community life of the congregation and life in the biblical text – ‘inscape’, ‘landscape’ and ‘textscape.’ It helpfully highlights some of the problems of narrative preaching in the contemporary world. Whether or not the book successfully replaces story with scene, narrative preaching with scenic preaching only time will tell.

There is much wisdom and practical guidance in this book. It is, I would suggest, the beginning of a discussion about scenic preaching, rather than the last word, and preachers will need to work with the material to mould it for their own purposes. As a prompt to working in new ways it will prove highly valuable, offering ways of bringing biblical text to life. Doctrine is presented more as ‘stage direction’ than focus of preaching, and for that reason preachers inclined toward exploring Scripture and life will enjoy the book more than those committed to doctrinal teaching. 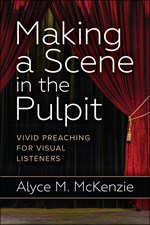 Making a Scene in the Pulpit