Preaching and the Digital Continent

An Interview with Scott Steinkerchner. OP 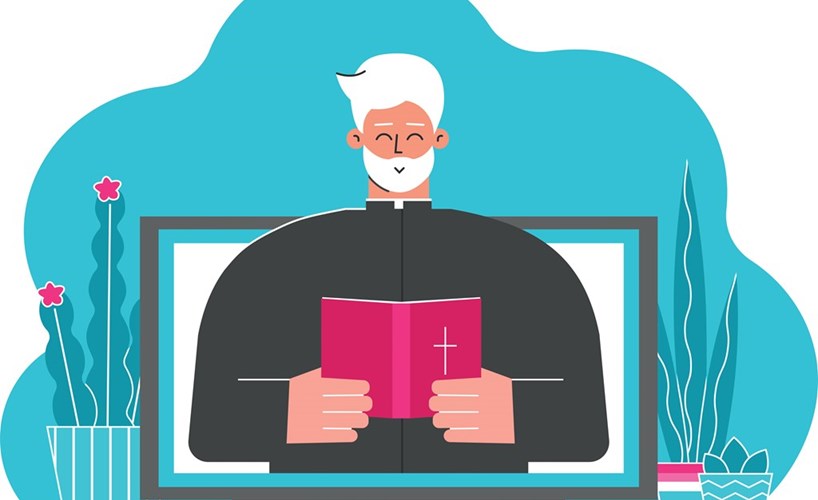 Scott is a Dominican friar, and a theologian and web developer. He was interviewed by Ann Garrido, Associate Professor of Homiletics for Aquinas Institute of Theology in St. Louis, Missouri

The emergence of the internet in the 1990s opened up significant new opportunities for Christian preachers. Among those quick to spot the potential was Fr. Scott Steinkerchner, OP a former computer programmer who entered the U.S. Dominican province of St. Albert the Great in 1995 and in 1997 was appointed his order’s first Promoter of the Internet. Steinkerchner launched the Dominican preaching site The Word (word.op.org) in 2006 and has maintained the site since that time making it one of the longest running daily preaching sites online. The following interview highlights key learnings Steinkerchner has gleaned over the past fifteen years and his predictions for the future of preaching on what Pope Benedict XVI has called ‘the digital continent.’

What was the impetus behind The Word?

When I was appointed Promoter of the Internet for the global Dominican Order for a second time in 2006, I began to wonder: What could we do on the internet in a worldwide sense as Dominicans that we would never be able to accomplish otherwise? We are all part of the Order of Preachers—friars, nuns, sisters, laity—and we talk about preaching as a Dominican family. What if we created a website where members of the Dominican family of every sort from all around the globe could preach together? Early forms of preaching on the internet consisted of preachers posting scripts of their homilies online as documents, but preaching is an oral event. We would need a very simple way that even preachers who do not have much technical access or know-how could call in from a phone line anywhere in the world and record their preaching, and a simple calendar tool that would allow Dominican preachers to sign up on their own for a particular date. Boom! With some pretty basic programming we were suddenly able to have Dominicans from all branches of the family collaborating together as preachers.

How would you describe the trajectory of the site’s growth?

When The Word launched there was tremendous enthusiasm within the Dominican community globally, which, of course, then levelled off. When I was serving as the Promoter of the Internet I was travelling internationally regularly and so it was easy for me to tell others about the site and to find new preachers. Since my term ended, it has been harder to keep the global dimension paramount, harder to maintain the diversity of preachers we had in the beginning. But with the emergence of Covid, we saw another sharp increase in the number of listeners from around the globe. People were looking for good preaching when they couldn’t attend church. In the last year, I’ve received emails from listeners in India, Wales, Scotland, and South Africa. Some have told me that, in absence of going to Mass, The Word is the main place they are hearing the Gospel proclaimed right now. Last time I looked, we had just over 300 daily subscribers to the site and about 600-1000 listens on a daily basis. I suspect that it may be higher. In areas will little internet access I suspect there is a fair amount of caching going on; one person downloads the preaching and shares it with others. About half of our listeners are from the U.S. and about half from other countries.

If someone were interested in starting an online preaching site, what coaching would you have for them?

I think The Word has built a faithful, committed ‘congregation’ because it has a very distinctive niche: We are a daily preaching site specifically in the Dominican tradition. You need to make sure that you have a clear sense of what you want to do and who you want to reach. To get a website started nowadays takes very little. You can easily post videos of preaching on YouTube with just your phone and create your own YouTube channel. There are lots of simple audio podcast platforms. Really the only costs involved at this point are the cost of the server which is very minimal and the small cost of a Mailchimp account if you send out more than 10,000 emails to site subscribers per month.

So, the hard part isn’t starting an online preaching site but maintaining it. I’ve made the commitment to post content every day now for fifteen years and counting. If a preacher is late submitting something by a couple of hours, I get emails from New Zealand. Even if I’m on retreat or vacation, I am never really able to get away. If I could do it over again, I would build a bigger team from the start to help keep the site going. I always worry that if I were to get hit by a bus, the site would be shut down overnight.

What possibilities do you see online preaching offering that pew preaching cannot?

Online you are freed from much of liturgical politics. In the Catholic tradition especially, there are restrictions on who can preach at Mass, and we lose out on the opportunity to hear from many voices. We don’t have those restrictions online. Of course, there are problems with having no guidelines on who can preach also. I’m careful in inviting people to preach who are well-prepared, who have a connection to the Order of Preachers, and who have been recommended to me as great preachers, but we have a wider variety of voices than people would often have the chance to hear.

How do you see online preaching changing in the future?

I wonder if there will be a resurgence of women’s voices in particular. When I was studying for the priesthood there was a lot of interest in empowering lay preachers. But much of that died down because of concern for liturgical norms. Now there is a new platform from which to speak that is not restricted by those norms. What could happen there? Over 50% of the preachers on The Word are women.

I’m also curious to see what will happen as the pandemic wanes. People have become used to watching preaching online wherever they want and whenever they want, even fast-forwarding as desired. We know that even among those who listen to The Word, many do not listen all the way through to the end. Many local pastors livestreamed services during Covid, but they did not necessarily have the tech help to do it effectively. I think in the near future there may be a bit of friction between the local and the global. Will people connect more with the preacher they know in their own community, or will they connect more with big name preachers who they do not know personally but who have a whole professional video team behind them? I’m not sure yet how that will all play out!

What I really hope for, in terms of The Word, is that preaching together as a family in this way, united in our diversity, will help to create other opportunities for Dominicans to work together. Individually, we have real talents and gifts, but together, we could accomplish so much more.