Preaching in Acts; Preaching from Acts

John is Parish Priest of Our Lady Help of Christians, Kentish Town 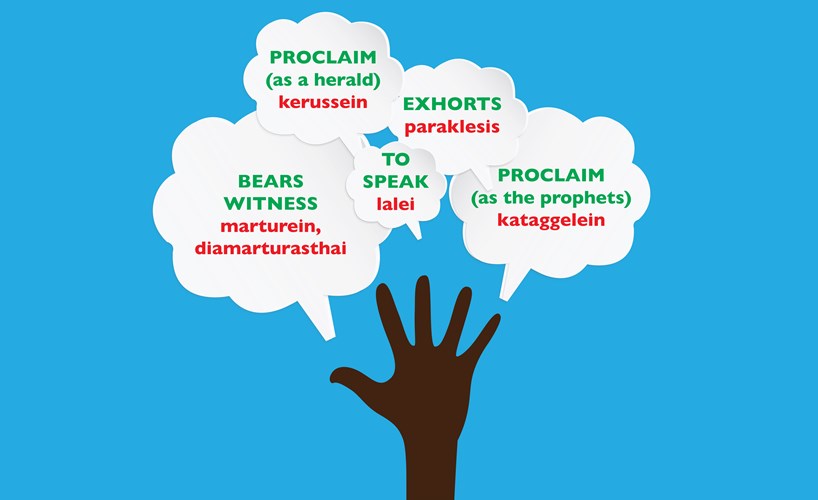 In the opening of a series of homilies on Acts, Saint John Chrysostom wrote, ‘We are about to set before you a strange and new dish – strange, I say, and not strange. Not strange, for it belongs to the order of Holy Scripture, and yet strange because, peradventure, your ears are not accustomed to such a subject. Certainly there are many to whom this book is not even known, and many again think it plain, that they slight it. This to some men their knowledge, and to some their ignorance, is the cause of their neglect. We are to enquire then who wrote it, and when, and on what subject – and why it is to be ordered at this festival. For peradventure you do not hear this book read (at other times) from year’s end to year’s end.’

Then, as now, Acts was only read in the churches between Easter and Pentecost. I have to admit that in my own preaching over the years I have tended not to preach from Acts but to focus on the gospel passages which are taken from the very rich fare provided by Saint John. Many preachers, limited by time to an oration of a few minutes, will find more than enough resources in the gospel passages but this may well lead to our treating Acts as a kind of archway one goes through without noticing its architecture or function. The topic of this essay is to consider what Acts understands by preaching and to consider how the passages from Acts might fit into a scheme of preaching for the Easter season. But first, we must first, like Saint John Chrysostom, clear the way with some background.

Biblical scholarship affirms with some confidence that there is a unity between Acts and the Gospel of Luke, even if there is not always complete agreement as to what that unity entails. Although I am not aware of Luke and Acts appearing together in any textual tradition, we can reasonably assume that Luke must have had the writing of Acts in mind when he composed the gospel. The relationship can be described in terms of promise (Luke) and fulfilment (Acts). The final words of Jesus as he departs from his disciples at the end of the forty-day period between his Resurrection and Ascension are ‘And behold, I am sending upon you the promise of my Father’ (Luke 24:49). In the opening chapter of the gospel, while the Greek word epaggelia (promise) does not appear its content is present in the hymns of Mary and Zechariah, expressed in the formula ‘God spoke’ (Luke 1:55 and 1:70) with reference to God’s covenant with Israel, a covenant of mercy and salvation. Formally the phrase ‘promise’ of the Father, is reiterated in Acts 1:4 which picks up on the final words of Jesus in the gospel, and in the speech of Peter at Pentecost (Acts 2:14-36) the content of the promise is equated with the promise of Jesus to send the Holy Spirit which has been received from the Father. The fulfilment of the promise is manifest in the scenes which Peter’s audience see being played out before them on the day of Pentecost (Acts 2:32-33). This reference to the divine promise will also be taken up in the speeches of Stephen (7:17) and Paul at Antioch in Pisidia.

While our text is known as the Acts of the Apostles, the real subject of Acts is not the history of the early church, or even the prominent human actors in that history, Peter and Paul, but the Word of God. The Word of God is a dynamic concept, or analogy, capable of different specific meanings. So, in Acts 6, the Apostles find their principal activity (defined as service of the Word, 6:4) curtailed by the need to take part in the regular distribution of food. ‘It is not acceptable’ they say, ‘to neglect the word of God in order to serve at table’ (6:2). The narrator, having reported the appointment of seven men to perform this task, then says, the word of God increased (2:7). The specific activity implied in the phrase, service of the word, would appear at first sight to be preaching, but it could also reflect a Semitic background where service of the Word was associated with service of Torah, in other words an activity which for the apostles would have included not only preaching as such, but the reading and study of Scripture and the traditions about Jesus. When the narrator speaks of the Word of God increasing, the evidence offered is the growth of new disciples. The word of God is antecedent both to the preachers and the act of faith of those who listen to the preachers and respond in faith.

Luke does not try to reduce the act of preaching to any one word but uses a wide semantic field as his resource. One of the most common verbs used by the author of Acts with regard to preaching is the simple verb ‘to speak’, (lalein). On several occasions he summarises Paul’s message as ‘speaking the word’ (for example, 13:46, 14:25, 16:6, 32 to name but a few). But he uses other words too. Paul, on several occasions proclaims (Greek kataggelo), a word associated with the speech of the prophets (3:24 kataggelein and lalein)) in the speech of Peter and John at Solomon’s Portico. Paul proclaims the word of God in the synagogue of the Jews (13:5), in the cities of Asia (13:36). He also ‘bears witness’ (marturein, diamarturasthai), and exhorts (paraklesis 13:15), calling at the end of the speech for a decision on the part of his listeners (13:40).

On some occasions in Acts a synonym for speaking the word is the verb kerussein (proclaim). This verb is associated with the noun kerux or herald, one who publicly proclaims an event in which another will be present, for example when the Emperor visited a province his coming would be announced by a herald. Interestingly the noun does not appear but in Luke’s gospel John the Baptist proclaims ‘a baptism (3:3) for the forgiveness of sin,’ the prelude to Jesus’ baptism with the Holy Spirit’ (3: 16). As the narrative proceeds it is Jesus who proclaims the kingdom (e.g. Luke 8:1) and sends others out to do so as well (9:2). When the verb kerussein is employed by the narrator of Acts, the object of the proclamation is Jesus himself.

THE PREACHING OF PETER AND PAUL

In the course of Acts, Luke puts into the mouth of Peter and Paul several speeches which we can also turn to for insights into how the apostles and the early church ‘spoke the word’. The first speech in Acts is that of Peter on the day of Pentecost (2:14ff). Peter’s starting point is the reaction of the bystanders to the sight of the Christian disciples babbling in different languages, which they assume is a sign of their being the worse for wear from drink.

Peter addresses their reaction first by appealing to the Scriptures, namely the promise in the Book of Joel that God would pour out his Spirit (vv17-21). Then he grasps the attention of his Israelite audience with the words,’ Listen to these words,’ and proceeds to announce the death and resurrection of Jesus. (22-24). But this is not mere narration but narration and theological reflection – You killed the Messiah, but what happened was a conflict between human designs and the designs of God. The very one you killed was the one God designed to save you. Lest his audience, who would have known the Scriptures, are not convinced, he justifies his proclamation from the words of the psalm, to reinforce the prophetic dimension. Using the psalm Peter returns to theological reflection. The psalm is prophetic; it foresees the resurrection of the Messiah (31). The story of Peter’s escape from prison will hint at the nature of God’s plan. It is about liberation, and its foundation story is the Exodus.

Peter then gives space for a reaction to his speech, and the questions which arise ‘Brothers, what should we do’. In response Peter invites them to take a decision, to repent and enter into discipleship of Jesus through the rite of baptism, and follows this up, testifying (diamarturoumai) and exhorting (parakaleo) them.

We now turn briefly to the Readings for the Easter Season, Year C. We will not fail to notice that whereas Pentecost comes at the beginning of Acts, the liturgical use of the book reads it as the finale of the Easter Season. Pentecost is an integral part of the one mystery of Easter, which like the Crucifixion and Resurrection should not be understood as a series of isolated events when we reflect on the different dimensions of the Mystery. This anomaly did not escape the notice of John Chrysostom in his first homily on Acts, and he accounted for it by reflecting on the baptisms which took place at Easter. He noted how baptism with water was only effective with the gift of the Holy Spirit and he saw the Easter Season as a time for the newly baptised and the whole congregation to increase their desire for the Holy Spirit already granted to them in baptism.

Historical critical biblical scholarship has detected more than one layer of tradition in the Pentecost story (Acts 2:1-11) – an original experience in the upper room which was followed by two editings which introduced the themes of the different languages in which the gospel was preached and the effect this had on the people of Jerusalem. The Pentecost story testifies both to the wondrous outpouring of the Spirit and the experienced reality that without this outpouring the early Church would never have grown and flourished. In year C The Roman lectionary uses the episode of Jesus’ appearance and his words, ‘Receive the Holy Spirit, whose sins you shall forgive……’ on the second Sunday of Easter and Pentecost, thus emphasising the link between the Crucifixion, Resurrection, and the gift of the Holy Spirit. The expanded text on Easter II (Thomas’ profession of faith) offers a hermeneutic for these readings. It is the concrete faith of the apostles that lies behind the amazing growth of the Church, witnessed to in the reading from Acts for the day and the readings throughout the season.