Preaching On The Synodal Path 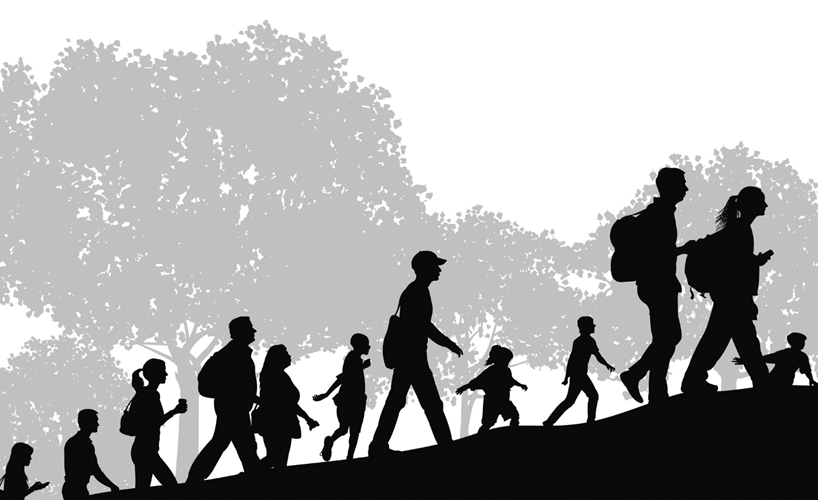 Perhaps to the surprise of other Christians, there’s a lot of talk about synods in Roman Catholic circles at the moment, or (to be precise) about ‘The Synodal Path’. This rather strange phrase has been adopted by Pope Francis as the title of a two-year conversation leading up to a global assembly of Bishops in October, 2023. But it might also be regarded as a description of the priorities set for his whole pontificate – and it has a significance far beyond the Roman Catholic fold, including a significance for how we undertake the task of preaching.

‘Synodia’ denotes a group of travellers in New Testament Greek. They are people who walk alongside each other (syn-); people on the same road (odos). Reference to a ‘path’ implies a journey; reminds us that the Church is ‘the Pilgrim People of God’1. We are wayfarers and fellow learners, rather than people who have ‘arrived’ or have all the answers. As the Second Vatican Council (1962-5) realised, a key task of the Church is to ‘read the signs of the times and interpret them in the light of the Gospel,’2 or (to turn the image around) to listen for the Holy Spirit amidst the challenges of our day. But listening is not enough, we have to get involved. As Pope Francis has vividly put it: ‘I prefer a Church which is bruised, hurting and dirty because it has been out on the streets, rather than a Church which is unhealthy from being contained and from clinging to its own security.’3 The Church, he says, should be a ‘field-hospital’ for broken humanity.

The Catholic Church has had a ‘Synod of Bishops’ in 1965, but it was generally a rather pallid affair, reduced to a meeting every three years or so to discuss a subject decided in the Vatican and to have its conclusions interpreted in the Vatican. The process didn’t invite radical thought so much as self-editing by participants. Now Pope Francis has given such Synodal assemblies a very different feel, drawing on his experience in Latin America. He urges participants to speak with Parrhesia (a favourite term of his) – with boldness, conviction, honesty. He allows for disagreement and is willing to leave matters unresolved while waiting for issues to clarify. The aim is not debate (one ‘side’ beating down the other ‘side’ in order to ‘win the argument’). Nor is the Synod a quasi-parliamentary assembly providing constitutional checks and balances against papal authority. (It still has minimal direct lay participation, after all.). Its purpose is discernment, listening for the voice of the Spirit, both in the Synod hall and, more importantly, in the experience of Christian disciples back home. Or, to put that in biblical terms: ‘Listen to what the Spirit is saying to the Churches’ (Rev. 2:7).

It helps to know that Pope Francis is a Jesuit, his spirituality forged over a lifetime by the Spiritual Exercises of St. Ignatius Loyola, meditating on the life of Christ and reflecting on his own inner life; seeking to discern what comes from ‘the Good Spirit’ (which brings harmony, releases new energy, rekindles hope – what Ignatius called ‘consolation’) and what is from ‘the Evil Spirit’ (dissipating energies, sowing discord and cynicism – ‘desolation’). Discernment cannot be hurried. Thus the ‘Synod on the Family’ (2014-15) was held in stages, its two sessions separated by a year-long global consultation process. With the input of many lay people, the papal document that followed, Amoris Laetitia (‘The Joy of Love’) had a far more realistic understanding of human love than some previous papal efforts and far less focus on the hot-button issues which have bedevilled the Catholic community in the past.

‘The Synodal Path’ process, launched by Pope Francis in 2021, is trying to embed this way of discerning in the wider life of the Church, trying to make ‘synodality’ not just an occasional activity for bishops but a new way of being Church. So much by way of background. Now we need to ask how preaching might be changed by understanding the Church as a group of pilgrims walking together, listening for the voice of the Spirit in each other’s stories.

On The Road To Emmaus

The most obvious example of the Synodal Path process is at the end of Luke’s Gospel (Luke 24:13-35). Cleopas and his companion trudge home in their defeat and fear and a stranger joins them on the road. He does not short-circuit the journey they must make; does not shout: ‘Look! It’s me!’; does not rebuke them, pointing out where they went wrong; does not even try to change their direction of travel. He just joins their walk into the gloaming and asks what they are talking about – or perhaps we should say he asks about the unvoiced pain that is in their hearts. That leads to two responses: the telling of life as it is, spilled out in all its hopeless bitterness (‘We had hoped that he would be the one …’); and then, when once the stranger has opened the Scriptures and explained the passages that are about himself, a new desire that this conversation might continue into the night (‘Stay with us, for it is nearly evening.’). The Sacramental Moment, the recognition of the Lord’s absent presence in the breaking of bread, comes only at the end, when the process has run its course. (Do we ever stop mid-service to discern whether those gathered are ready for that encounter before moving unthinkingly from Ambo to Altar?)

If we take Emmaus as our model, Synodal Path homiletics will not begin from theory or doctrine but from people’s hurts and struggles. The aim is not to ‘put people right’ but to speak to their hearts. There is a gentle, understated tone to this discourse, a seeking truth together. Cleopas and Co. listen because they know that they are being heard. In fact, they hear their own experience now better than they could have put it themselves. They are given permission to be themselves without pretence. No need to pretend to have all the answers or to be right; no requirement to be faith-filled and content. Just be honest because that’s when Christ can get a word in edgeways. The healing of a broken heart is not a hiding of the wound but an undemonstrative acceptance of it. In the next scene, Luke’s Jesus will go on to show the apostles his hands and his feet (Luke 24:39): the same feet that walked to Emmaus: the same hands that broke the bread, then disappeared.

Another Synodal path moment comes early in Acts. In fact, the whole ten days from Ascension to Pentecost is a Synodal Path moment, waiting and praying for the Spirit. It is not downtime, not uneventful (as we might expect it to be from John’s Easter account – with the locked-in disciples cowering in fear of death). Luke’s Eleven do what it is in their power to do, replacing Judas with another witness who was with them from those first Galilean days. The One they needed was already in their midst, of course. But they had to wait in prayer for that to be revealed. Meanwhile, they learned to live with incompleteness, waiting for their need to be crystalised by Peter and for the Lord to read their hearts. That is discernment: seeing what is ripe, matured, and seeing what is not; waiting until we know the difference.

Preaching on the Synodal Path embraces provisionality. And that is important in the Church today. Old models of Church life are radically broken, and no new synthesis will emerge in our own lifetimes. Covid-19 has nudged us maybe five years further down a path which seems to outside observers like mere Decline and Fall. Faith is no longer a ‘given’ in society; no longer transmitted from one generation to the next with a mother’s milk. Attending Church is not an obvious Sunday pastime for our neighbours now. Congregations are, as a rule, ageing. Numbers of ordained ministers are in free-fall, at least within my own Roman Catholic community.

We preachers might feel sometimes on a Sunday night like Cleopas and his companion before the Lord shows up. But, leaving behind the old buildings of Zion was not a disaster. It was in their own home that they eventually understood what was happening in their wayfaring conversation. Whatever our defeats, we live this side of The Ascension and of Pentecost. Like Cleopas, we are witnesses to the fact that we have recognised the Lord in the breaking of the bread. What will make us convincing witnesses is that we do not claim too much. We are those who have not seen him and yet believe (John 20:29). The source of our preaching is the conviction that He is Risen and the promise that, absurd though it may sound, we shall be His witnesses in Jerusalem and throughout Judaea and Samaria and indeed to the earth’s remotest ends (Acts 1:8).

Jesus, The Crowd & The Apostles

The Preparatory Document for the 2023 Synod 4 recognises the interplay between Jesus, the Crowd and the Apostles. Each of these three ‘actors’ must be present for us to be able truly to speak of Church at all. In the Gospels Jesus always interacts especially with the most vulnerable, those ‘separated’ and ‘abandoned’. He is always open to the widest possible audience, the crowd in all its diversity. Pope Francis puts special emphasis on addressing the needs of those who are most marginal – in whose cries we may hear the voice of the Spirit and meet Christ himself (Matthew 25:35).

At the same time, Jesus’s call draws a smaller group aside. ‘Thanks to the gift of the Spirit of the Risen Lord, they are to guard the place of Jesus, without replacing him: not to put filters on his presence, but to make it easy to encounter him.’ To make it easy to encounter him – that’s surely a good job-description for any preacher. But on the Synodal path, our breaking of the Word will inevitably take us beyond our comfort-zones, because we are to have an attentive love for the multitude – ‘The proclamation of the Gospel is not addressed only to an enlightened or chosen few’ – and we are always in listening mode, seeking the Spirit in the Word and in our private prayer (of course) but also in the Cleopases of the world, lumbering despondently along, burdened, broken and hurting. To their hearts, their stories, must our preaching speak.

1. The ‘Dogmatic Constitution on the Church’ of the Second Vatican Council (known by its opening words in Latin, Lumen Gentium), used ‘The People of God’ as a key term to describe the Church (in Chapter Two), putting this category ahead of the then habitual emphasis on the hierarchical nature of the Church (Chapter Three), returning to the theme once more in the seventh chapter, on ‘The Pilgrim People of God’.

2. Pastoral Constitution on the Church in the Modern World, Gaudium et Spes, n.4

3. Pope Francis, Apostolic Exhortation on the Proclamation of the Gospel in Today’s World, Evangelii Gaudium (2013), n.49