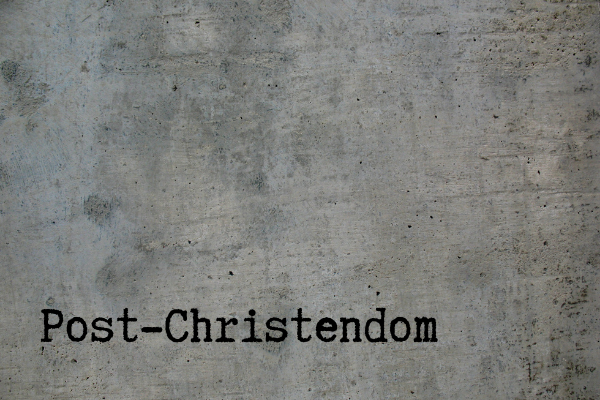 Editor’s Note: This week we have the first of a two-part interview with Dr Stuart Murray-Williams on Post-Christendom and its impact on preachers & preaching.

Stuart, you have a rich and varied background in Christian ministry. To begin with, tell us about your experiences in London.

I moved into Tower Hamlets in 1978 and spent 12 years there, planting and leading a multi-ethnic church. This was an exciting and demanding period of ministry and I learned much about mission and church in a context of poverty, homelessness, racial tension and other faiths. The church is now over 40 years old and deeply rooted in the area.

During this period, I discovered the Anabaptist tradition and embraced its Jesus-centred approach to Scripture, discipleship and community, it’s holistic approach to mission and it’s commitment to peace witness. With friends, I launched the Anabaptist Network in 1992 – now the Anabaptist Mennonite Network (https://amnetwork.uk/). I have been deeply impacted by this long-neglected tradition that is coming into its own in post-Christendom.

You decided to study the Anabaptist thing in more depth?

Yes, I spent three years studying for a PhD in Anabaptist hermeneutics. I was then invited to direct the Church Planting and Evangelism course at Spurgeon’s College. I taught there during the 1990s, when church planting was popular. It was a privilege to interact with many church planters and mission strategists.

In 1997, concerned that most church planting was happening in affluent areas, I proposed an alternative approach, recruiting self-funding teams to incarnate the gospel in poor urban neighbourhoods. This became Urban Expression (www.urbanexpression.org.uk). I continue to work with this mission agency, which has now deployed over 40 teams.

Since the late 1980s, I have had books published on various subjects, including post-Christendom, Anabaptism, church planting and urban mission.

In my book Post-Christendom, I suggested a definition that has gained wide acceptance:

‘Post-Christendom is the culture that emerges as the Christian faith loses coherence within a society that has been definitively shaped by the Christian story and as the institutions that have been developed to express Christian convictions decline in influence.’

I argued that the term describes a period of transition, not a new cultural context, and that this involves the church moving from the centre of society to the margins and embracing its identity as a minority within a plural culture. In the book A Vast Minority, I suggested that this will require changes in our structures, strategies, theology, use of resources and much else.

There are overlaps between post-Christendom and post-modernity, but it is unhelpful to collapse them into each other.

Post-modernity is a slippery term but represents distaste for supposed ‘metanarratives’, such as Modernity and Christendom, greater openness to ‘spirituality’ (broadly defined), and loss of certainty about the inevitability of ‘progress’.

Post-Christendom refers to the changing place of the Christian community in a complex society that is increasingly unfamiliar with the gospel and culturally more distant from the churches. Post-Christendom offers an opportunity to reconsider theological, ethical and ecclesial issues once the Christendom blinkers are removed. And the challenge is to think and act as cross-cultural missionaries within our own culture.

How does Post-Christendom impact preachers and the preaching ministry?

There are many dimensions to this question, including the role of the preacher, the form of the sermon, the contexts in which preaching takes place, the role of the congregation, understandings of authority, etc.

I am interested in the impact of the ‘Christendom Shift’ on the church in the fourth and fifth centuries. From the evidence of the New Testament and the pre-Christendom period, it seems that participation and dialogue was more common than in later centuries. The ‘Christendom Shift’ resulted in the dominance of the monologue and silencing of congregations. Various factors influenced this, including the enhanced size of congregations, the architecture of church buildings, the increasing gap between clergy and laity, the limitations of the overwhelmed catechetical system, and the cultural influence of rhetoric.

In post-Christendom, greater attention should be paid to learning rather than crafting sermons, to participation rather than performance, and to the empowering of many more to preach and teach, giving opportunities for questions and contributions. We need to develop and nurture hermeneutical communities. Monologue preaching still has a role, but only as one aspect of the church’s proclamatory and teaching ministries.

Next week: becoming a hermeneutical community and preaching less to grow more!

Preaching to the converted?

Have you ever asked yourself the question, “Who is this sermon for?”