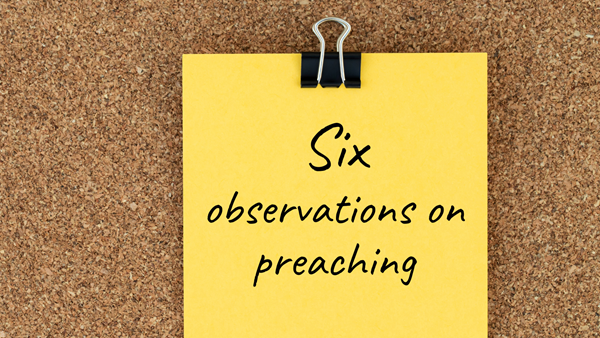 Reflections on 45 years of preaching from the Rev David John

I am not sure if the tiny congregation of Three Oaks Methodist Church in East Sussex had any idea what to expect on that Sunday afternoon in the summer of 1975 when a 20 year old student stood up to deliver the sermon.

What they received was a badly mangled version of Dr. Martyn Lloyd Jones’s message on Romans 3:21, which I had recently heard at my college Christian Union. They were very gracious, but I suspect it was less carefully considered exegesis and more like Macbeth’s “tale told by an idiot, full of sound and fury and signifying nothing”!

Nonetheless, it was the start of a preaching ministry which has continued over 45 years. In January, I retired from pastoral ministry and an invitation from your Editor has afforded the opportunity to reflect on lessons learned and on how my approach to preaching has changed during that time. What follows reflects my personal journey and is in no way intended to be prescriptive.

1. Trusting my own perceptions.

In my earliest days of preaching the first step was to reach for the commentaries, often one from the excellent Tyndale series produced by IVP. Only later did I feel confident enough to begin with my own questions about, and interpretations of, the passage. This has since become the most exciting part of the process, when I am free-wheeling with Scripture. It goes without saying that this needs to be followed by a detailed study of the commentaries, not least to curb any wayward theology. I am sure the old adage is correct, that if you come up with an original interpretation which no scholar has ever thought of before, then it is probably wrong!

2. Moving away from my script.

That first sermon was hand written on two or three sides of narrow feint A4, and read out in full, though I gabbled through it so quickly and nervously that it only lasted about ten minutes, probably to the enormous relief of those present. As time passed, I longed to develop a preaching style which was not wedded to my notes, and which left me free to engage more directly and dynamically with the congregation. In a little book on how to improve one’s memory I came across a simple system, based on visual images, which enabled me to remember up to 20 discrete points. This has allowed me to move away from my notes, which is the characteristic of my preaching style which has drawn the most (usually favourable) comment.

To avoid the danger of preaching becoming a one-sided conversation, I will often involve the congregation by asking open questions inviting them to share their ideas about an aspect of the passage. Sometimes these questions will encourage those listening to ‘enter into’ the story; for example, to describe what they see, hear and feel as Jesus enters Jerusalem on a donkey. Many of the Psalms are interspersed with a ‘Selah’. Although the term is notoriously difficult to interpret, a common view is that it was a musical pause, an opportunity to reflect with an instrumental accompaniment on what had been said or sung. I am fortunate that my wife is an accomplished violinist, so I have sometimes asked her to play an appropriately improvised musical interlude while the congregation is invited to reflect on, and if they wish share about, what God has said to them.

4. Preaching for a response.

In my early days as a Christian, back in the late 1960s, the standard pattern was to have the sermon at the end of the service and to follow this with a hymn, a blessing and refreshments. This left little, if any, time to respond to what the preacher had said. One could almost hear the flapping wings of the birds as they swooped down to snatch away the seed. More lately in my preaching, I have built in time and space for an appropriate response. This may be a direct appeal, particularly after a gospel message, but it might also be an encouragement to write down a prayer, or a specific course of action which they feel prompted to take. It may be an invitation to come forward for prayer ministry, to light a candle, or to take home an object of particular significance - perhaps a seed to be planted as a reminder for the potential for growth in the Kingdom of God, or a stone to signify that they are part of God’s living temple.

For most of my ministry I have worked as part of a team. This has been helpful and challenging in giving an opportunity for receiving constructive criticism. I remember preaching a sermon on one of the great Christological passages (Hebrews 1, I think). I was feeling rather pleased with myself until my colleague remarked, “That’s all very well, but what are we supposed to do with it?” Of course he was right. Jesus says that the wise are those who both hear the word and put it into practice. I now try to focus strongly on the application part of the message and to be as specific as possible. How will it be of use to members of the congregation facing redundancy, dealing with bereavement, caring for elderly parents or bringing up a young family? How will Sunday’s message bring encouragement and direction on Monday morning?

I know that the use of personal illustrations is a potential minefield which some think is best avoided. Certainly in my early days as a preacher I drew most of my illustrations from television, films, literature, or from one of the many books offering ideas. However, as I grew more experienced in pastoral ministry, and knew and was known by my congregation, I found that personal stories, particularly those which revealed the pastor as ‘the wounded healer’, brought an extra dimension of reality and authenticity.

There is obviously far more that could be said, but I offer these few simple observations from my own ministry. Two excellent books which explore these and other themes in more detail and with greater skill are “A Preaching Workbook”, and “Embodying the Word”, by David Day. I commend them to beginners and experienced preachers alike.