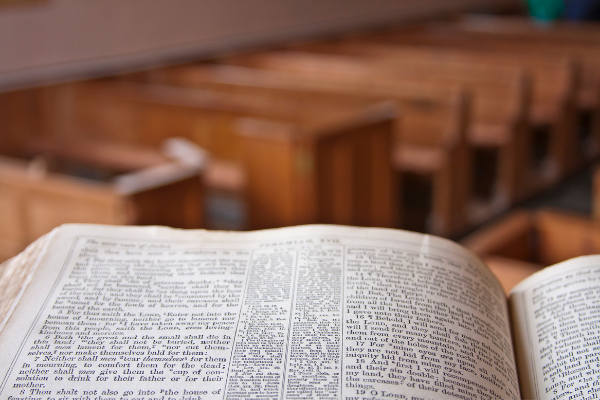 To launch the new College of Preachers blog we have the first in what we hope will be an occasional series on "The Greatest Sermon I Ever Heard". We hope that preachers will share not only what the sermon was, but why it made such an impact.

Today's piece is from Steve Holmes. Steve is a Baptist minister, presently serving as Principal of St Mary’s College and Head of the School of Divinity in the University of St Andrews, and as an elder of St Andrews Baptist Church. -- The Editor

The Greatest Sermon I Ever Heard

I was asked recently about the greatest sermon I have ever heard. I’ve heard lots of good sermons, but I know which one was the greatest—in part because I have thought a bit about what makes a sermon great.

It was about 25 years ago, in the chapel at Spurgeons College. Bishop Lesslie Newbigin was the preacher, right towards the end of his life. He was blind by then, so he couldn’t see us, and he was so bent with age that we almost couldn’t see him behind the pulpit. ‘When you go out into the ministry,’ he began, to a chapel full of ordinands, ‘what are you going to do?’

He started listing some options: ‘some people will want you to be a social worker…’ colourful details followed. ‘But there are professional social workers; why should you do what they do, but less well?’ Other examples came … counsellor … politician … I can’t remember them all. He spent virtually all of his time dismissing options for us.

Then he paused. ‘So what should you do?’ He smiled a true saint’s smile—it lit up most of south London—and gently but urgently said two more sentences.

And then he sat down.

Why was this the greatest sermon I have ever heard? It was brilliantly constructed and brilliantly preached, but I’ve had the privilege to hear a fair number of sermons like that. The brevity of the ending was as powerful as it was audacious, but I’ve heard more than a few like that too.

This one stands out because it spoke with shattering clarity into my key existential questions at the time. I didn’t write down that closing line. I didn’t need to. It’s been branded or tattooed somewhere deep inside me ever since.

As preachers, we have to strive for excellence in all our sermons of course—but greatness is a gift of grace, when the best we have to offer is taken up by the Spirit and given to someone who needs to hear just that truth, in just that way, just then. Newbigin did that for me, one Wednesday morning 25 years ago in south London.

Under God, it made me the preacher I am today.