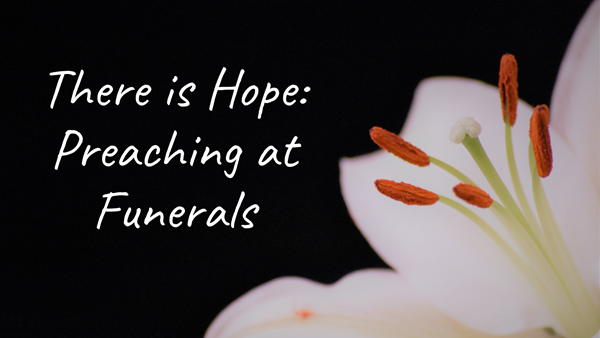 There is Hope: Preaching at Funerals is my latest book, to be published  by IVP. As I wrote in the preface:

It reflects my experience of taking hundreds of funerals: for although I have been involved in theological education – for two years in an African university and for six years as principal of Spurgeon’s College, for almost thirty-five years I was a pastor.

Each section is in two parts: first, I have expounded the passage in question and in so doing have drawn upon the insights of others; then I have reproduced a sermon which I preached on the passage…. The sermons reflect a wide variety of pastoral situations ranging from a baby who died in the womb to a 21 year old student who took his own life; from an 18 year old who died from a genetic disorder to a 98 year-old who longed to see her Saviour; from a woman cut down in her prime by cancer to a dementia sufferer who had become a shadow of his former self.

So let me whet your appetite with the sermon preached at the funeral of a 21 year old student who had jumped in front of a train. His death was shock to everybody. There had been no warning signs. I had not known the young man and had only met his parents the week before at a church quiz night. The parents were not people of faith. However, in talking to them, I discovered that their son had started to attend church services while at university.

Even in the darkness God is there

Sadly, I never knew Richard, so it has been instructive to listen to the family’s tribute. Clearly Richard was a much-loved young man. When I visited the family, his mother spoke of him as being kind and thoughtful, loving and giving, conscientious in his work, endowed with the gift of humour but also with a strong sense of justice. Let me encourage you this morning to remember Richard, to bring to mind all those happy memories of Richard, and to thank God for them. From a Christian perspective God is the giver of every good and perfect gift (Jas 1.17)

It is because Richard was a likeable young man, that his untimely death is so tragic. We can only guess at the pain and the darkness which must have filled his mind and heart. In our bewilderment, let us remind ourselves today that there is one who does understand – and that is God himself. As David wrote in Psalm 139, the Lord knows each one of us, he knows us intimately: “You know when I sit down and when I rise up, you discern my thoughts from far away…. You are acquainted with all my ways” (139.2, 4). God understands us through and through.

Let us remind ourselves too, that this God who understands was there for Richard not just in the good times, but also in the bad times. Richard may have not been aware of God at the time, but even in his darkness God was there. “Where can I go from your spirit? Or where can I flee from your presence? If I ascend to heaven, you are there; if I make my bed in Sheol [the land of the dead], you are there. …. If I say, ‘Surely the darkness shall cover me, and the light around me become night’, even the darkness is not dark to you” (139.10,11). The good news is that there is no place where God is not. Furthermore, God is not just ever-present, he is also ever-loving. Even in Richard’s darkness God was there, surrounding him with his love.

Some worry about the fate of those who take their own lives and wonder whether God would even forgive such a person. Sadly, in the past the church has been responsible for giving rise to such worries. Today, thank God, we think very differently. We now realise that suicide is not an unforgivable sin. Few if any, when they end their lives by suicide, are seeking to defy God. They are not sticking their fists in God’s face: no, many are looking into their own faces and hating what they see.

I do not believe that God would have us worry about the eternal fate of those who have ended their life by suicide. I believe that Jesus will welcome home people like Richard with special warmth and tenderness.

Today let us comfort ourselves with the thought that there is “nothing” which “can separate from us the love of God” (Rom 8.38) – nothing in this life, nor in the next, “will ever be able to separate us from the love of God which is ours through Christ Jesus our Lord” (Rom 8.39). And in this conviction let us commend Richard to God’s safekeeping.

Paul Bealsey-Murray is a retired Baptist Pastor and former Principal of Spugeon’s College, London. He continues an active ministry in retirement of research, speaking and writing, with a particular focus on resources that will be helpful to those in pastoral leadership. His latest book reflects his concern for helpful, appropriate, Bible-based preaching at what is often one of any minister’s most challenging situations. See his Church Matters blog: www.paulbeasleymurray.com