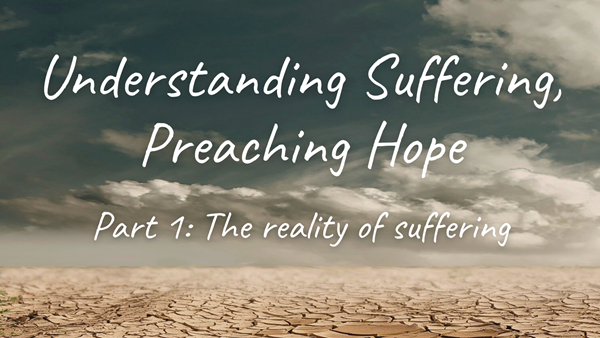 Part 1: The reality of suffering

Romans 5.3(5: “And not only that, but we also boast in our sufferings, knowing that suffering produces endurance, and endurance produces character, and character produces hope, and hope does not disappoint us, because God’s love has been poured into our hearts through the Holy Spirit that has been given to us.”

Suffering is, to a greater or lesser degree, a part of every life. All of us are likely, at some point in life, to experience some degree of suffering. And yet, some Christians feel they need to deny the reality of suffering. The reasoning is like this: If we truly belong to Jesus and are loved by God, we should be happy. And, if we are blessed by God, then we should have a good life. If we suffer, that must mean we’ve been abandoned by God. And if we admit to suffering, we are somehow letting God down.

I don’t agree with that reasoning. For one thing, Jesus acknowledged that his followers would experience suffering in this life. In John’s Gospel (15.18(20), Jesus tells his disciples, ‘If the world hates you, be aware that it hated me before it hated you. If you belonged to the world, the world would love you as its own. Because you do not belong to the world, but I have chosen you out of the world—therefore the world hates you. Remember the word that I said to you, “Servants are not greater than their master.” If they persecuted me, they will persecute you...’

At the time when Jesus was engaged in his earthly ministry and when Paul wrote his letter to the Romans, a comfortable life (wealth, good health, etc) was seen as a sign of God’s blessing and suffering suggested one was either cursed by God or somehow had earned God’s disfavour (think, for example, of the book of Job where Job’s friends encourage him to admit to committing some sin, arguing that he must have done something to earn God’s disfavour and bring such suffering upon himself). Paul turns this thinking on its head – he boasts of his suffering because he is suffering for Christ, as Jesus said his followers would.

Paul very clearly links suffering with hope, and that’s important. When a person is suffering, it is difficult to hope. Our preaching should be a place where people can encounter signs of hope that will help them negotiate suffering when it occurs.

Paul links suffering to hope by way of endurance and character. As I write, it hasn’t been very long since the Olympics and the Paralympics took place. The link between suffering and endurance is easy to see in regard to the training regimes of elite athletes, especially in ‘endurance’ sports such as distance running, swimming, and cycling. An athlete puts him or herself through rigorous physical training that can cause physical suffering, pain and exhaustion. The result, however, is stronger muscles, the ability to engage in physical activity for extended periods of time, and increased skill in the relevant sport. An athlete in this situation has, through work and suffering, built up endurance. Of course, in that example, both the suffering and the endurance are physical. The endurance to which Paul refers is spiritual and the suffering may be physical, emotional, psychological or spiritual. But the principle is the same. As we come through a period of suffering, we develop endurance – the ability to keep going. I don’t think Paul would suggest it is easy. At times, it can feel unachievable. And that is why it is important that we, as preachers and pastors, encourage members of our congregations to be honest about periods of suffering, and equally encourage them to support one another and pray for one another.

While we must acknowledge the reality of suffering, and we can see how in some cases suffering in the short-term may result in long-term gains, we must be careful not to glamorise or glorify suffering. We don’t want to say that because suffering is in some way ‘good’ we don’t need to concern ourselves with relieving suffering where we find it.

Next Week: pt 2 - Why Suffering? Can Science Shed Some Light?